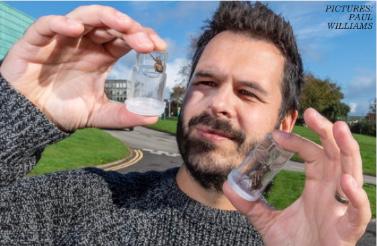 A spider-loving student from St Austell has unearthed no less than eight new species of spiders, previously unrecorded in Cornwall.

Tylan Berry, who is currently studying the final year of his degree in environmental resource management at Cornwall College’s Newquay campus, loves nothing more than happily grubbing through the undergrowth, hunting for spiders.

This has led to some impressive discoveries in the county for Tylan, including eight species of spider never before recorded in Cornwall. His tireless efforts over the last few years, contributing records to national databases, has helped to create a new level of awareness of the incredible spider fauna that Cornwall has to offer.

Fortunately for Tylan, with his love for all things arachnid, it’s never been anything less than a pleasure to study his lifelong fascination.

“I have always been interested in bugs, ever since I discovered I could find them by lifting up stones as a toddler,” Tylan said.

“It was when I was given a copy of the Collins guide to Spiders of Britain and Northern Europe, that my fascination with spiders really took hold. It became my bedside table book and hasn’t really left ever since,” Tylan explained.

It was these long childhood days spent searching for spiders, that led Tylan to his current focus of trying to understand patterns in their habitat preferences and geographical locations in the county.

“There have been some excellent finds in Cornwall in recent years and it’s great to be a part of uncovering some of these species,” Tylan continued.

“It was excellent to be part of the team to shed some of the mystery around the very rare Western Ground Spider (Gnaphosa occidentalis), a spider that is unique to Cornwall in the UK, being known from only two small headlands on the coast.

“Another standout moment also has to be finding the scarce Triangle Spider (Hyptiotes paradoxus) for the first time ever in Cornwall with fellow students whilst completing a course assignment.”

Despite the lifelong fascination, it was only recently, after a 15 year career in retail and time out to focus on his family, that Tylan has directed time to be more involved with his love of the natural world by enrolling on his current course at Cornwall College Newquay.

“I decided that studying would suit me down to the ground, still being able to devote time to my children, but to also indulge in my obsession with spiders!

“Studying at Cornwall College Newquay has been a perfect fit and I’ve thoroughly enjoyed it. It goes without saying that gaining new and fascinating knowledge has been an exciting journey, though I think one of the key factors for me has been just meeting like-minded people and sharing enthusiasm for the natural world.”

“He has achieved amazing marks throughout his time with us, overcoming the daily challenges of family life with small children during lockdown to gain a distinction in his studies so far,” John continued.

“Using education as a springboard, his resilience and passion for the natural world are making a real difference conserving the species he loves.”

Cornwall College Newquay is part of The Cornwall College Group which offers a range of university-level programmes linked to conservation, zoology and the marine environment.

To sign up to attend an upcoming open day at Cornwall College Newquay, visit HERE

The Cornwall College Group (TCCG), one of the largest educational providers in the South West, has welcomed Patrick Newberry as its new Chair of Governors.